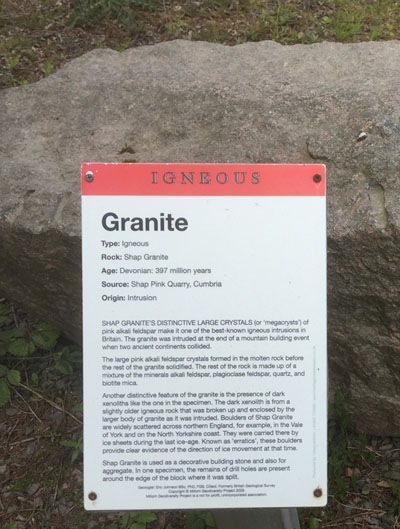 Millom Rock Park opened in Spring 2010 at Ghyll Scaur Quarry in south-west Cumbria, to provide a unique visitor attraction. It gives a new and exciting perspective on the geology of the Lake District and a fascinating insight into the workings of the quarry and the local mining industry. Many of the rocks on display were extracted from the quarry, others were brought in from other quarries in Cumbria and Lancashire.

The Rock Park is hugely informative. Each rock sample is accompanied by a board that explains in detail its origins, age, composition and formation. Each board is colour code according to its geology type: igneous rocks (eg granite), sedimentary rocks (eg limestone and sandstone) or metamorphic rocks (eg marble and slate). The differences between these three main groups and how they are formed are clearly and simply explained, with the aid of diagrams, on the Rock Cycle information board.

There are other information boards too. Of particular interest is a large storyboard that maps out diagrammatically the geological history of the earth and how it relates to the evolution of our planet.

Another board explains how the rock samples relate to the excavations in the quarry, and shows how the rocks are layered using a photo of the quarry face with overlaid diagrams. 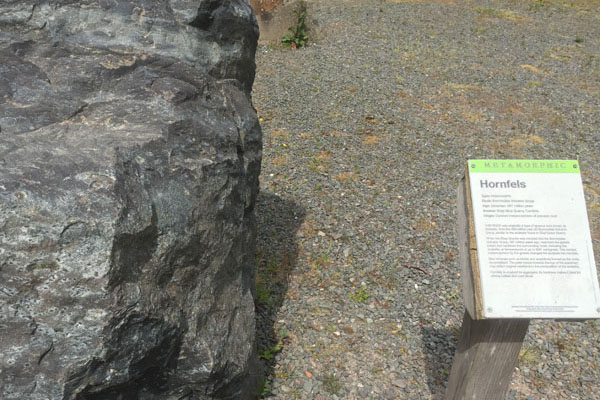 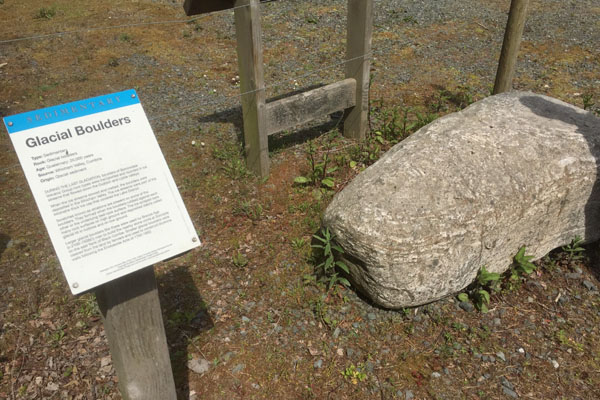 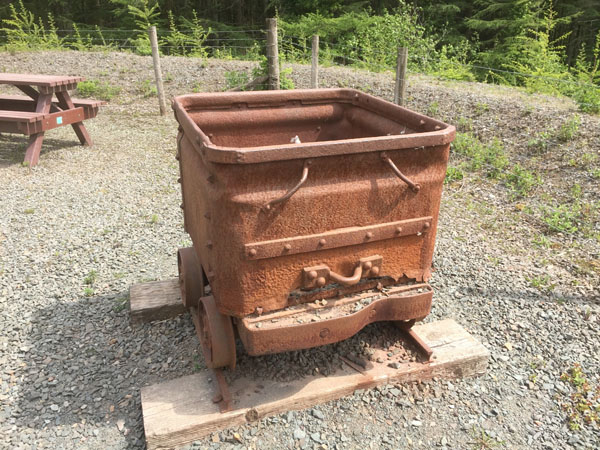 A bogie used in mines underground to transport iron ore from the pit head, and pushed by men to a lift and hence to the surface.

Following the discovery of a huge deposit of hematite, a high-grade iron ore, on the coast at Hodbarrow in the mid 19th century, Millom grew into a thriving industrial site that was the largest of its kind in the world. The ore had an iron content in excess of 60% and was regarded as the richest source of hematite in the country. Samples from Hodbarrow are on display in museum collections around the world.

A steel works was later built next to the mines to process the ore, and over 1000 men and boys were employed during its peak years.

Its rapid growth was fuelled by the industrial revolution and the building of new railways. The town was prosperous for over a hundred years until the Hodbarrow mine closed. The proximity of the sea to the mines led to problems from flooding which finally forced their closure in 1968. The Ironworks were closed the following year, leading to a collapse in the town's fortunes.

Today the area is a nature reserve, with diverse flora and fauna. It is rich in orchids and also a breeding ground for the Natterjack toad. Part of the flooded Hodbarrow mine site is now an RSPB reserve. The site is reasonably level, providing an easy 3.5 mile circular walk around the central 200 acre lagoon and stunning views over the Duddon estuary, should you wish to make more of your day out when visiting the Rock Park.